Predicting the meta shift can be a tumultous task, but if I’m going for Vegas odds I’m not putting my money on the Browns to win the Superbowl. I’m looking for the safe bet. So today we’re talking about Cygnar AKA: the good sportsball team of Warmachine. (NOT the Cleveland Browns.) We are going to focus on the new theme Heavy Metal. This article may become a regular thing for me and we’re calling the series “LIST FOCUS” for lack of a more imaginative name. Enjoy.

Heavy Metal is primed to become Cygnar’s new dominant list fixing robot.
Initially, the list isn’t sexy and it doesn’t surprise us with crazy new rules or models. What it does do is force a players hand into good models that we may otherwise avoid. The joke we used to tell was about the Rhulic basher warjack. Anyone who ever put a basher on the battlefield was often impressed by the model, but it was all a trick. The basher was never anything special – it just forced players to use slam and slam itself was an amazing ability that players often overlooked. Soon we were slamming models all the time using any random warjack. The basher was forgotten but the lesson never was. So here we have that same thought process. A faction full of focus efficient warjacks, with multiple journeyman, efficient warcasters, and an answer to any problem. PP has given us a basher of a theme. Forcing us to utilize the new strongest (arguable) model type in the game; the warjack. It helps that the theme is allowing easy access to 17 free points, an extended deployment zone and reform on important solos. It’s essentially forcing us into playing good models and rewarding us for the decision.

The basics of list construction are simple. You take a bunch of warjacks and those warjacks generate power up focus. This is the main strength of the list – free focus. This means a heavy metal gun line is boosting shots where it counts which is deadly and efficient. A single charger warjack can produce two rng 12 pow 12 shots with one being a fully boosted attack and damage roll. Take that gun bunnies! The armies can be built in many different ways and the focus efficiency will always be present. The warcaster assigned will really define where the favorable match-ups are, so let’s review some lists! 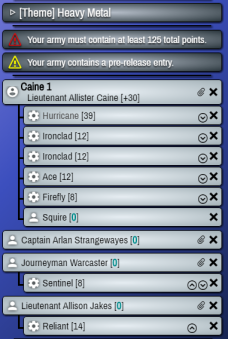 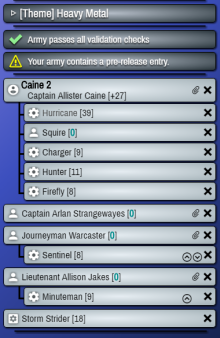 Caine1: Utilizing a sniped hurricane and thunderstrike allows Caine to control the battlefield with slams. This army has no fear of wind wall, incorporeal models or Menoth’s choir. The army is geared for fighting armor as Caine can always just feat the enemies infantry off the table. Take that PVlad!

Caine2: This army (like many others) relies on an arcane shielded colossal and it is equipped to remove models until the colossal has no threat left on the table. The stormstrider is making his presence felt with fire for effect. We are looking for a long game where ECaine can punish people and become more effective as the enemy army thins out. Just remember; all Caine’s love to die so be careful.

Caine3: Snore-fest mcgee and his charger spam squad are here to say “feat, go.” With absurd firepower for one turn we look at Caine3 as a boom then bust style caster. This army brings plenty of firepower to down every Circle heavy you can see… and with mage sight you can spot a clump of models for removal. As always the biggest weakness is a beautiful turn followed by a dead Caine. If you choose a list like this as your Wurmwood match be aware it’s a finesse game for both players.

Siege Brisbane: A caster that really shines in theme. Siege is an effective Wurmwood hunter while finding more balance in list selection than Caine3. He also feels a lot safer into his match-ups as he’s not focus hungry and can hang out in a hole. You may start noticing a lot of minuteman action in these armies – they make for great sentry stone killers. 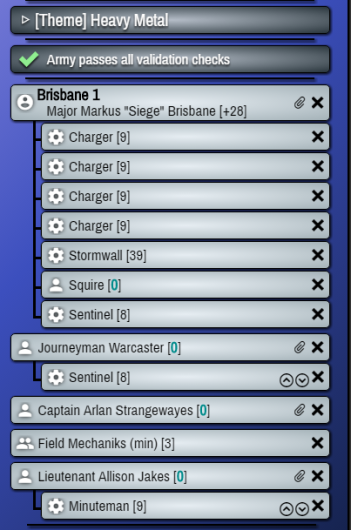 Kraye: Reform 5 is a strong tool on any model but adding it to warjacks is full on absurdity. I’ve taken a balanced approach and the army performs well at range while still threatening melee. First turn with trample, reform and the 2 inches extra deployment you gain a ton of ground with your models sitting in the middle of the board. I think Kraye has been waiting for this tier, as a caster that gets more production from a large battlegroup this army really sings under him.

Allison Jakes2: An underrated warcaster that plays a lot like Kraye. Me personally; I think she’s an ironclad caster all the way. I’d almost like to spam 4+ ironclads with her in every list as they benefit from every buff she can offer. My favorite part of this list is the duo of minutemen. With feat, jump, escort, and positive charge. The minuteman can threaten 15 inches (melee) with mat 8 pow 12 melee attacks, plus a free auto hitting pow 12 (if you get into range.) I’ve killed casters with way less… 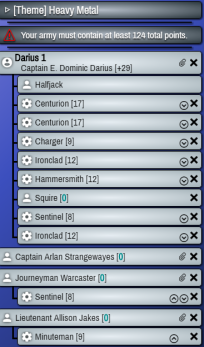 Haley2: Really digging deep into the bad casters for this list… No but really – Haley2 as many of you may of guessed can adapt comfortably to a heavy metal build. With a possible stormlance nerf waiting around the corner we may see players reaching to the next theme. This particular list chooses a stormclad for Jakes as the model threatens 16 inches and gives you a tough bullet to bury on feat turn. The worst feeling on earth is feating defensively as an EHaley player. Gotta keep the pressure on.

Darius: The much maligned caster shows promise in a tier that gives him only what he wants: warjacks. There are rumors of double colossal Darius seeing testing but I really prefer the centurions as I can build a much larger battlegroup with some gun models able to clear lanes etc. Darius is really easy to jam so I’d look for list diversity not spam. I like this jack spam to counter enemy jack spams. The army may struggle a bit with lots of armor, but they’ll be struggling with your armor just the same.

Obviously there are more builds possible with each given caster and the casters I haven’t listed will be plenty good with the theme. Example being: Haley3 whom is considered a top tier caster already is going to be running this theme effectively. It’s also worth noting that I did not include the swordknights in any of my lists. As the only infantry available to the theme, I’m not against them one bit. I had been testing a Haley3 list with swordknights in it to good effect but my goal in this article was to embrace jack spam. Still, be aware that they are a valid option despite costing you a free solo if you field them. Almost every caster can find play in this theme and with armies fielding less models the need for boostable guns is on the rise. I’d argue that Cygnar has the most diverse selection of warjacks in the entire game. So when people say “spam” there’s no reason to worry because the army composition is still quite varied and it adaptable.

Looking forward to seeing Heavy Metal on the table. Thanks.